Deciduous Is Not a Dirty Word 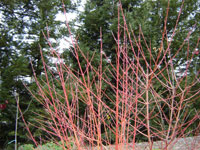 Where winters are cold and snowy it is expected that most plants will lose their leaves during the winter. However in coastal California we expect plants to be green and showy all year long. Indeed, in our mind Mediterranean climate many plants are in active growth during the winter months. For many people the idea of using deciduous plants seems to go against the notion of year round good looks. This does not have to be the case. Deciduous plants have a place in many types of landscapes and using them enriches the palette from which we create our gardens. (Pictured above: Cornus stolonifera ‘Midwinter Fire’.)

Why then do gardeners include deciduous plants in their gardens when so much year round greenery is available? One of the first reasons that comes to mind is fall color. Many deciduous shrubs and trees turn shades of yellow, orange and red before dropping their leaves, giving a final splash of color as the days shorten and the gray of winter sets in. threes are especially noticeable. The maples (Acer spp.) of which there are many types, provide shade in the summer, fall color and allow the sun to brighten areas during winter. Similar in leaf shape is American Sweet Gum (Liquidambar styraciflua) which is available by named varieties, each having different fall color. Pistache (Pistacia chinensis) and ash (Fraxinus spp.) are other trees which provide fall color. California buckeye is a native tree or large shrub which may go dormant during the summer months in response to dryness; if given deep watering it will hold its leaves longer. The large fruits remain on the tree after the leaves have dropped making a curious decorative feature. Even without the fruits, the twisty structure of the buckeye makes it an interesting focal point in a garden. (Pictured above: Betula ‘Crimson Frost’.) 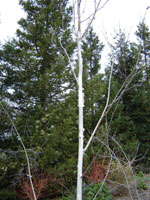 Shrubs with colored bark can create a beautiful show in the winter garden, especially on cold dreary days where their color really shows off. At the top of the list are the different shrubby creek dogwoods (Cornus species and cultivars), with bark colors in shades of pink, orange, red and yellow. White Birch bark is especially beautiful during the colder winter months, as are the curly, twisted branches of the corkscrew willow (Salix tortuosa ‘Matsudana’, pictured at left). 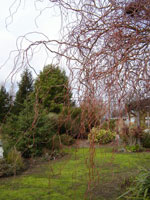 Many deciduous shrubs also turn color before dropping their leaves. The snowball bush (Viburnum opulus ‘Sterile’) turns red. Rosa rugosa turns yellow and red as does the Japanese Berry (Berberis thunbergii). Several selections of the latter have bronzy red leaves during the summer which tunr redder with fall. Smoke bush (Cotinus coggygria) is another shrub that comes in green or bronze leaved forms which both turn red in the fall. Other deciduous shrubs are not spectacular in the fall but put on a good show in the spring or summer when they flower. Weigela always attracts attention with its clusters of pinkish white tubular flowers in spring. The native wild currant (Ribes spp.) is very showy with long clusters of pink or white flowers. This is to mention only a few of many shrubs worthy of a spot in the garden in spite of their loss of leaves in the winter. Indeed many of the shrubs and trees have striking bark and branch patterns. Their winter silhouettes add an element of interest and variety to the landscape and the bare branches allow light to penetrate dark spots. 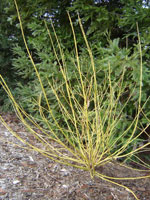 Many grasses and perennials are deciduous as well. Grasses such as Pennisetum spp. and Miscanthus sinensis may be left standing through the winter as dried arrangements and cut cleanly to the ground in early spring for fresh growth. This once a year cut back makes for low maintenance plantings. Some shrubby perennials can be cut back completely as well. Mexican sage (Salvia leucantha) and summer lilac or butterfly bush (Buddleja davidii) both look better if cut back each year. While Caryopteris with its intense blue flowers in late summer, can be cut to the ground or left standing. (Pictured at right: Cornus stolonifera ‘Flavimera’.)

Deciduous perennials often die back completely and over winter with their root crown safely protected in the soil. Planted in and around other perennials their disappearance is often not missed and they are a pleasant surprise when they reappear in spring or summer. Care should be taken to mark the sites of such perennials so they are not accidentally dug up during their dormant season. It also is good to exercise snail and slug control as these plants emerge so they are not eaten as they come up.

While there are countless wonderful evergreen plants, our gardens would be the poorer without the many deciduous plants as well. Don’t overlook them in your garden scheme.

Bare root fruit trees are here! They are potted an

The Farmer’s Market Favorites are in from Dave W

The nursery reflects the garden after 3.3” of ra

It’s a great time to plant after the recent rain

Grevillea ‘Moonlight’ is one of our favorite p